"We knew right from the start that it would be a challenge to install a new control system, new weighing technology and then our RTC automatic moulding sand tester on a pan grinder in such a short space of time." Said datec’s Managing Director Christian Ebert, speaking retrospectively about the swift retrofit project.

"We serve small series niches and we want to deliver quickly with good quality every time. It should not matter whether we need good sand first thing on Monday morning or Wednesday lunchtime or not until the end of the shift on Friday night", explains Managing Director Dirk Reinke on the aim of the investment project at Gießerei Radeberg GmbH. The measurement and control technology in the entire sand processing plant had become a weak point. 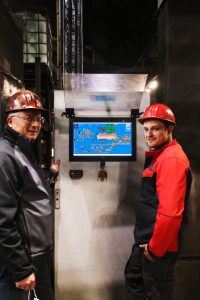 Gießerei Radeberg GmbH, which emerged from a centuries-old tradition of glass mould casting, is one of the few companies that still cast glass moulds, but that is no longer nearly enough. In the meantime, small batches are produced on two moulding lines. A hand moulding shop is also available for piece weights up to max. 1000 kg. In both areas, complex and core-intensive parts are the main focus. Due to relatively small melting furnaces, the company is able to produce more than 30 different casting qualities. A wide range of approvals for the marine industry and also the possibility of supplying completely machined parts round off the manufacturing possibilities.

It began with the replacement of the old contactor control circuit, still from GDR times, which was replaced by a modern PLC control system of the latest generation. To meet the requirements of unmanned operation, a central visualisation system was set up on the moulding line for monitoring "from a vantage point". From there, the system is operated; tasks such as changing the recipe selection or recording and acknowledging faults that occur. The multitude of measured values from the new measuring devices is displayed on the screen and later continuously documented in the batch report.

"That was a feat of strength because we had to take on the task of dealing with the main supply cables right at the beginning." adds Steffen Müller, Head of Maintenance. "We wanted to comprehensively improve operational safety and make sure there were no more crazy malfunctions. We managed to implement and achieve that in the space of a fortnight." 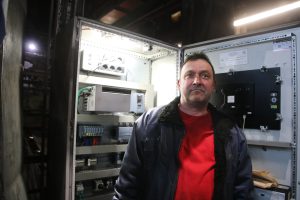 Steffen Müller, Head of Maintenance, in front of the new decentralised control system

With the aim of improving the uniformity of the moulding sand values, the sand preparation plant was equipped with new measuring technology. For example, the inlet of the bucket lift for the used sand dosing system was fitted with cutaway platform scales. 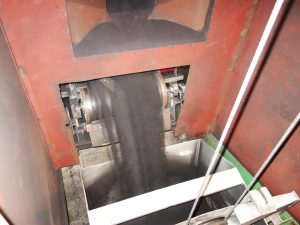 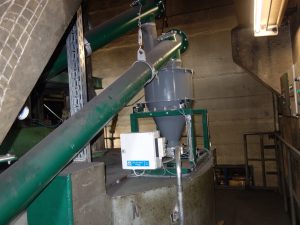 Binder scales with 2 new dosing screws on the mixer

The big step forward was taken with the installation of the ROTOCONTROL RTC 107 automatic moulding material tester for continuous measurement of compaction and compressive strength. The special challenge was the mixer. A pan grinder of the old design with a minimum cycle time of six minutes required a modified control behaviour, as the development of compaction is significantly slower than with an intensive mixer.

"With the RTC, you now have an additional tool. It enables precise coordination of the moulding material and the model. By specifying a compactability in the recipe, you are very flexible and can achieve the target parameters in the shortest possible time," notes Hendrik Schuster, Head of Quality Assurance. "A discussion about the moisture content can be avoided in this way. You receive the data after each batch and are thus informed about the condition of the moulding material at all times. Subjective impressions can thus be matched immediately."

Now no uncontrolled parameter changes can be made by just anyone.

If it goes wrong, no one wants to be the one responsible - the classic worry of many production managers when things suddenly don't run according to plan and it turns out that important parameters have been nonsensically adjusted by unknown persons. As a protection against such unpleasant manipulations, in Radeberg the individual log-in to the operating and visualisation PC is carried out with an RFID chip, which is used by each company employee for personal time recording. Only authorised persons can access the menus and their access and parameter changes are documented. Especially the latter documentation is also useful for carrying out extensive trials in order to evaluate the changes in a targeted and systematic way.

Recording who has changed which parameters in the menus and 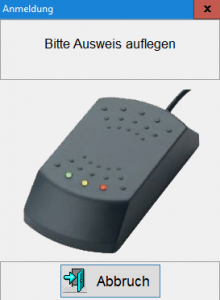 Logging in for menu operation via RFID_reader

In the overall package of this retrofit measure, the item - shake_out_cooling for a cooling water dosing system on the conveyor behind the unpacking station was rather insignificant, but the effect has been all the more remarkable. "It even surprised us just how much the used sand is cooled down and also how much moisture remains in the used sand." commented Tobias Herrwerth, a PLC programmer from Braunschweig, on the control system that he had installed. Sands with an unpacking temperature of over 100 °C are easily cooled down to temperatures below 50 °C. "Initially, we were not quite sure whether there would be a sufficient amount of air to carry away the evaporated water. In addition, we were unsure whether the evaporated water would not condense and then drip happily away somewhere."

For water dosing, each unpacking of a box is signalled separately by the unpacking station in order to actually initiate the addition of the water for a short time and at the right moment. An infrared temperature measurement helps to determine the correct amount of water for the desired target temperature range. 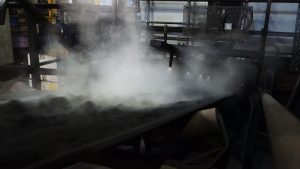 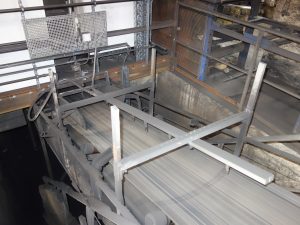 Structure of the nozzle devices

You will find more information about the company Gießerei Radeberg GmbH here.